The Magician’s Lie by Greer Macallister

‘Terrified and threatened, I lashed out with all my strength and loosed a waterfall of blood from a fellow human being’s body.’ 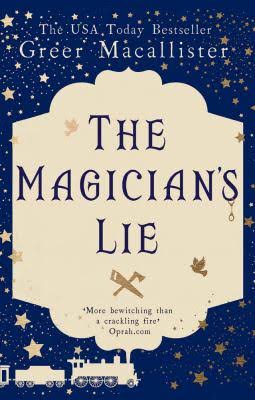 Already a bestseller in the USA, Greer Macallister’s novel has been acquired by Legend Press and is now taking the UK by storm. But with a strong female lead and a gruesome death at its heart, is it a love story, a murder mystery, or a harrowing tale about the trials and tribulations of growing up?

In the early twentieth century, The Amazing Arden is the most notorious female illusionist around. She is renowned for the taboo act of sawing a man in half – an illusion never before performed by a woman, especially not with a man as the victim. When the young police officer, Virgil Holt, lurks in the audience on the evening Arden picks up a fire axe instead of her usual saw, he sees more than he bargained for. The plot quickly spirals, with The Amazing Arden suspected of murder and determined to tell her story from start to finish.

The story is told in two arcs – the present day narrative in which Holt attempts to interrogate Arden, and the narrative our suspect spools like a magician’s handkerchief throughout the night, a story of deception, loss, love and rising stardom. The young woman’s story kept me gripped throughout, each new passage of her life taking me a step closer to the conclusion, and the truth about who really murdered her husband.

Arden’s most difficult trials come at the hands of her faux-cousin, the arrogant Ray, who plagues and haunts her throughout her teenage years and adult life. It’s worth mentioning that the book gets a little gory at times, primarily due to violence at the hands of Ray – if, like me, you’re likely to faint at the mention of broken bones, be prepared to read these passages lying down!

Once again, Legend Press have acquired a title with strong feminist undertones. Arden is a strong-willed woman from the get-go. Determined to make a name for herself as a stage performer, she paves her own way, unwilling to let anyone hinder her efforts. Love is not taken lightly, nor forgiveness granted easily – Arden is a woman whose trust must be earned. Equally, she is a woman willing to sacrifice everything for those she holds dear.

The detailed exploration of illusions which captivate a nineteenth century audience are just as captivating to the reader – long-limbed dancers, girls in beautiful sequin dresses, tame tigers, identical twins, fire and smoke run like a string of lights through this visually enchanting novel. An alluring and satisfying read.

The Magician’s Lie was launched in Hardback in the UK on April 3rd and is part of Legend Press’ April Book Tour.

Order the book from Legend Press in paperback or ebook here.